I wrote this response to the RJC after a friend received a letter from one of their board members endorsing Bannon:
"First and foremost, I appreciate receiving any information that gives different views concerning controversial figures appearing more frequently in our news today. However, when people start claiming that the news media is wrong and not to be taken seriously because it might be saying something one disagrees with, it is the beginning of the end of our Democracy as we know it today. After reading an endorsement of Steve Bannon, a known leader of the Alt-Right Movement in the US, I was actually surprised. It was sent to me via email by the RJC (Republican Jewish Coalition). Without mentioning names, I read the statement made about Steve Bannon and his commitment to Israel. He proclaimed that Bannon is a Zionist. Well, if Zionist is the Code Word for Alt-Right, then I personally want no part of him, or what he stands for. People make themselves fit in for convenience.
"I am a supporter of Israel as a United States Citizen, not a citizen of Israel. If America does not come first, along with all of its diversity, then Israel will subsequently not exist. It is not just one party but all of America that has to work together, then our differences can be solved. Support of Israel has to be a Universal Commitment based on the fact that Israel is a Government formed as a Democracy in the Middle East. Israel itself is a more diverse place today, and people who reject that will be left on the sidelines. Instead of Politics, Education would be more apropos to our needs. I also read Jared Kushner’s article about his support of his father in law, President Elect, Donald Trump, proclaiming that he is not Anti-Semitic. Actions speak louder than words. Only time will tell! He not only has to apologize to the nation and world for his outrageous rhetoric, which he started during the Primaries, long before the election, but come to grips as to how important his new “Job” really is. He has to appreciate the fact that he won an election that could have gone in any direction. 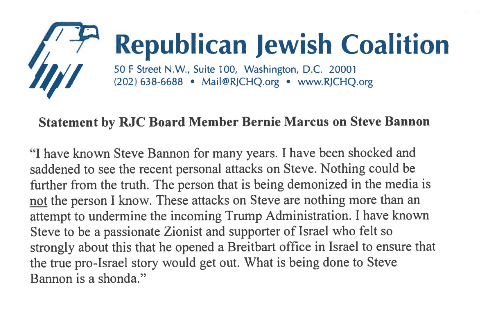 "As it is, he still finds it difficult to admit that he did not win the Popular Vote or a so-called Mandate. Instead, he is still boasting about his win. He should kiss the ground he walks on, and not just in Trumpland, but throughout our incredible diverse land, The United States of America. That is why it is called “United”. Be humble, fill yourself with humility and come to grips that it is important to win over the “other side” with words that heal. People like me are here to listen. Let me be surprised, but happy. Learn to take a joke and laugh at yourself, as it has been discovered that laughing is healthy. Of course, these are just easy ways of handling things and I know that road is rarely taken


"From a political view, I still feel that appointing Steve Bannon as his Chief Strategist does not fly with me, as well as many others who see him as a negative influence with ideas that are over the edge. Trump is afraid to go out of his insulated box to bring this nation together. It could be the road to his success or his failure. We, the USA will be the recipients of these decisions.

"My personal answer to the endorsement of Steve Bannon is the following; 'Zionism has nothing to do with a person being Anti Semitic or not. There are many people who support the existence of Israel who have no feelings about Jews on any level. They want Israel to exist for their own religious reasons, or for Jews to go back “where they belong”. And, in my opinion, it is a shame that Bannon was chosen to represent and be Chief Strategist in the Trump Administration.' "
Posted by Unknown at 4:11 PM No comments:

The Beginning of the End?

After a week of total devastation and depression, and that is very light for the feelings I have towards the outcome of our 2016 Presidential Election, I still can’t accept the fact that our nation, filled with such diversity and promise, has gone in such a backward direction. I guess Trump reached a core of America that believed his promises and did not want what they believed was “More of the same.” It is so ironic, that a candidate like Trump, who rarely associated with people he would refer to as losers, would have empathy for those disenfranchised members of society. Democrats, throughout history, have been the ones always fighting for those in need, basic human rights, such as Healthcare, Jobs, Woman’s Rights, Gay Rights, on and on. He hit every chord including pulling the worst possible feelings of people out into the open concerning Immigration and World Policies and just let the S..T hit the fan and went with it. Well… it worked! It has been said recently that, “Stronger and Wrong” beats “Weaker and Right.” I guess I can agree with that now seeing the dismal results. In my last writing I said and called for everyone to vote because I truly felt that if that were so, the best candidate would win. Well, everyone did not vote, sad to say, but certainly enough to show that “Different” was in the cards for America. And so it is!

Already, Trump’s pick for his Chief Strategist, Steve Bannon, hits a controversial note throughout the world. He is known for his blatant feelings about minorities, especially Jews. Being Jewish myself, I cringe when I think that Jews could have voted for Trump. Bannon was the lifeline to Trumps winning this election. He is obviously a brilliant media strategist and does his best by stirring up the most negative feelings people could have, and they went for it, hook, line and sinker. But, of course, the average voter, never really reads into the important stuff, they just want results no matter what happens. I asked many friends who were Trump supporters if they knew who Steve Bannon was, and they not only did not know anything about him, but also did not know he was running the campaign. Shame on them! This pick is probably the most dangerous he will make, being that
Trump needs an adviser to help him make the major decisions during his four-year term as President of the United States of America, soon to be known as The United States of Trump. Don’t forget, he was the most ill-informed candidate in history. The campaign reached the lowest levels of divisiveness both in lies and conspiracy theories. Donald Trump will need help, but not the help from a Steve Bannon, a known Racist and White Supremacist as depicted on Breitbart News, his baby, promoting such unconscionable ideas. His voice will be heard throughout the World because of Trumps decision to make him Chief Strategist.

To add to this, Trump now wants his family to have top secret clearance. Also, they will be handling his so called Blind Trust of business dealings. Sounds dubious to me! The question is; can that be something he could actually get approved? I have now been inundated with news about this, over and over again. It is like the campaign just rolled into a new segment of this unusual reality show. It is really a reality show, heading into its first season of “The New West Wing”, or The New Right Wing”.  Either way, hopefully, there is a light beyond this dark tunnel.
Posted by Unknown at 4:49 PM No comments:

PLEASE….JUST GET OUT AND VOTE!!

Voting is not a Gift! It was once a cause, and still is in some countries, fought for by brave people who are long gone but hopefully not forgotten.
I am trying to think of what to say to those who are tired, confused and angry about this unusual Presidential Election filled with all sorts of hate, on both sides, Democrat or Republican. Reality is settling in. On Tuesday, November 8th, a candidate will be chosen as the next President of the United States of America and we as the voters will be held responsible for this decision. Thanks to our Democracy, our votes really do mean something. By not voting, you are really accomplishing nothing other than giving someone you may not care for or “hate”, a word I have heard all too often during this campaign season, an edge.
I guess, what I am trying to say is, pick one great happening that the World will look up to us for and take a shot at it. Electing the First Woman President of the United States of America is the most positive message we can be giving the World today. Think about that only, and Draw That Line in the voting booth to make history happen.

Winston Churchill once referenced this, “Hire a man for a great speech” and “Hire a woman when you want to get something done”! This is truly the time to make that decision and break the “Glass Ceiling” once and for all.
I guess this message is for those of you who just can't decide, or Millennia’s, too young to realize that your vote can really count. Just look back to the year 2000, Bush v Gore. Only a handful of votes made the difference! We can only contemplate what our world would have been if that Election turned to a different decision.

I am taking a chance asking for a vote that might not be my decision, but, simple as this sounds, I truly believe that if everyone voted, the right person will be elected, keeping our Democracy safe and sound! Leave no stones un-turned, have no regrets, just Get Out and Vote!!
Posted by Unknown at 1:00 PM No comments:

MONA LISA is the name behind the Mona Lisa painted by the famous Leonardo da Vinci. She sits in a special room at the Musee du Louvre in Paris. I chose her namesake and photo for my Blog, The Woman Card, because supposedly she is” the best known, the most visited the most written about, the most sung about and the most parodied work of art in the world”.{1} She also spurs up a wonderful memory of a trip I took to Paris with 3 Girlfriends about 20 years ago. Standing on line at the Louvre and finally seeing this famous painting, much smaller than we could have possible thought, was something you don’t forget. Her mystical eyes truly follow you wherever you go. To me, she seemed to be the perfect woman to represent The Woman Card and I really like her name, Mona Lisa.

I have always supported Women’s Rights throughout my life by voting for the party that showed the most support. In fact, all Human Rights represent Women’s Rights. Once you give up one, you give them all up. Think about this: Can you believe in the Right to Choose and not believe in Gay Rights? In my opinion, they go hand in hand. Although this Presidential Election moved me to start writing, I hope to continue following the news and writing about upcoming issues that become controversial. It is our right and our duty to speak up because if you don’t, your voice will be drowned out by those who oppose your beliefs.